Ursa Major seems turned upside down, or as it turns out, I’m simply looking at it from a perspective I’ve never seen. That is, Southern Hemisphere perspective, and it took the first couple nights here to orient myself with the new arrangement. Changing the way you look at something you’ve beheld your entire life can be disconcerting.

Drinking in the Milky Way one night (it always goes down smooth), pontificating the relative motion of all the different visible bodies, I was joined by Salaash, an eighth grade boy attending Olmaroroi school who’s part of the large family I reside with. My shooting-star count was up at 3, plus a couple satellites.  Not bad. We got talking about plans and his future and what he wanted to do. His idea is university rather than tending to the goats and cattle like generations before him. Salaash is part of the more recent crop of Maasai men who value education and don’t hold on to as many traditional customs, such as ear-stretching and living a purely pastoral life. I didn’t ask how many wives he expects.

Struggling to articulate what kind of university education he wanted, as we gazed above I suggested why don’t he become an astronaut. “A what?” he asked. I tried to explain what the word meant but it was lost on him. “Like Neil Armstrong,” I offered. “Like a what?”
I was blown away. “A man, he was a famous astronaut…Neil Armstrong.”
“Who is that?”
“You’ve never heard Neil Armstrong, the first man on the moon?”
“On the moon?!”
Jeepers, I thought. “Yes, people took a rocket to the moon!”
“Right now?”
“No this was many years ago. But right now there are people in space, they’re inside of a giant satellite that orbits the earth.”
“There are people in space right now?”
He was pointing at the sky in disbelief.
“Yes, they’re inside of a big ship. It’s called the International Space Station. People from different countries go there to conduct scientific research. You could maybe go there one day.”
He laughed but I was serious.

Salaash is a handsome kid with a goofy nature and a knock-out smile that’s hard to contain in conversation. He mentioned he’d like to be an engineer. I was impressed and said that could be a kind of scientist. But I couldn’t get over the fact this 13 year old boy had never dreamed about shooting off in a rocket ship, hurtling through space and setting foot on uncharted strange worlds. I basically had/have this daydream every day.  “Ass-trow-not” he said.

I went and got my iPhone and turned on data hoping for the best. Standing on my toes waving at the stars I managed to load some Google images with one bar of signal before shutting it down to avoid charges.
“There,” I said pointing at a famous picture snapped by Buzz Aldrin, “That’s Neil Armstrong.”

We scrolled through some of the most incredible photos taken by humans, including this one, which struck him. 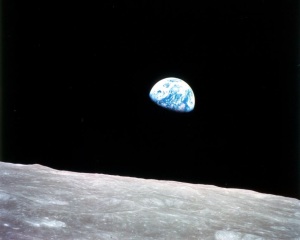 “This is the earth?”
“Every person who has ever existed lived and died there, on that little marble.”
“Everyone.” he said
I expanded some impressive shots of the ISS falling around the world.
“…and these, do you know what these are?” I pointed to the massive solar panels powering the ship and compared it to the 5-inch rectangle sitting on his roof which powers one dim light at night.
“It must be very expensive,” he stated factually, grinning.

Appreciating a picture of astronauts in their space suits doing some exterior shuttle work, their bodies weightless and dwarfed by the expanse of earth and unlimited space, Salaash said maybe he would in fact like to be an astronaut. There’s really no good reason why he shouldn’t get the chance and it’s a shame the fantasy has remained as such for most of us thus far into the age of space exploration. Especially when considering the trillions spent on weapons annually.

Salaash collecting water in a wheelbarrow… There’s using your head. (So you don’t have to use your head.)

Scanning through the official science books of the Kenyan school system, at least in primary school, little focus is placed on cosmology. The vast majority of lessons I’ve taught rightly consist of local concerns like HIV awareness and prevention, diseases and parasites, environmental and agricultural knowledge, water pollution and safe handling, and in the higher grades more general science like some basic energy and biology. Only class 6’s textbook has a brief unit on the solar system, consisting of about a page, an outdated diagram consuming most of it.

Not having any teaching aids besides a chalk-board, my desire to build a solar system model with the class seemed unlikely. Science experiments here can only be thought experiments, and none of these kids has or will ever have the chances I had to build a volcano or be in the science fair or watch a Bill Nye video. Science is appreciated best when demonstrated, but the beauty of using the scientific method to learn about our universe is that it allows basically every single thing to come alive. “The feeling of awed wonder that science can give us is one of the highest experiences of which the human psyche is capable. It is a deep aesthetic passion to rank with the finest that music and poetry can deliver.”
— Richard Dawkins

In the nearest town a good 45 minute bumpy motorcycle ride away I searched for some basic craft supplies to construct a model with. When finding even a black piece of poster paper proved impossible, I decided any creative effort utilizing a few tennis balls and socks stuffed with paper would miss the point and hardly pass as any kind of understandable model. So I scrapped the idea and decided the solution was to keep it simple. I managed to find some novelty light-up balloons and one of them was yellow. Knew I had some coloured chalk already and hey, guess what colour a blackboard is? Black, you say? Kinda like space?

The class sat long enough for me to cover the layout of the solar system one planet at a time starting from the sun, explaining what it would be like to live (or rather, be unable to live) on each one. The possibility of some kind of simple life slugging it out on Mars or a moon of Jupiter or Saturn made an impression on one boy especially. That other planets have moons, and can have many several, seemed a difficult concept to grasp. It’s easy for even the most informed of us to slip into the tendency of subconsciously believing there’s only one moon and one world. The truth is that worlds probably vastly outnumber stars, and when it comes to planets moons seem to be the rule, not the exception.

No one had heard about the Curiosity rover and when dwelling on the possibility of a human mission to Mars, the class scoffed at the idea of a Kenyan being the first person to touch the soil. But why should they scoff? A manned mission should happen in our lifetime and I told them that anyone in the room could be part of that mission, and I meant it. The opportunity exists, along with no good reason why a passionate and determined Maasai kid couldn’t excel all the way to the red planet.

I left the balloon out until the final part of my lesson, knowing full-well how the attention spans of these kids work. After our voyage had reached its farthest distance from the sun at Neptune (blackboard room and student concentration failing to reach Pluto-like objects or the Oort Cloud), I briefly explained how solar systems form, beginning with particles and dust, slowly revealing the hidden yellow balloon as the crucial point where gravity at the centre of the spinning accretion disk accumulates more and more mass, causing such density and heat that fusion ignited our star, and the bulb in the balloon magically started glowing yellow while it inflated. “Oi!” is the sound of surprise kids make here, and is essentially translated as “woah!” Those who could list correct planet order shared the remaining balloons, or other ‘stars’, and soon there were deafening supernovas exploding all around. 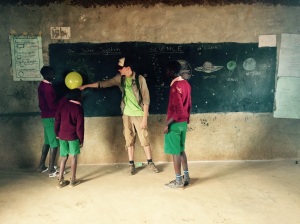 I guess the ‘sun’ is running out of hydrogen.

Why does learning about planets even matter? The textbook’s unit is titled ‘The Solar System’, but I’d prefer to call it Our Solar System, for ‘The’ suggests entitlement. Our solar system is only unique to us because we happen to be in it. Humans spent untold generations believing in a geocentric universe. Once Copernicus and Galileo and others demonstrated otherwise, Newton providing the mathematics, we realized we weren’t the centre of anything, and in fact, the more we discover the less significance we realize we can claim. And I’d claim that fact as being extremely significant.

As it turns out, nothing but the moon orbits earth; we’re one planet of many that circle the sun. Turns out the sun is one of many stars within our galaxy – each potentially containing its own plethora of worlds, many no doubt comparable to our own in size, composition, and stellar distance. Turns out our galaxy is one of many untold billions, each containing their own stars with systems of planets. What will turn out about our universe? Well, let’s stop at what we know. The point is, it turns out earth is not as universally unique as we like to think.

This reality ought to be incredibly humbling. Not just the scale of it all, but the understanding that our ideas and imagined differences and reasons we, humans beings, construct to selfishly hurt others while feeling justified by claiming higher purpose, come solely from the minds of generations who believed everything was made specifically FOR us. But our position in the cosmos exposes just how haughty and self-important such ideas are, clinging to the notion of universal significance and using that notion for our own agendas. Starting with our own solar system and working one’s way out, turning back and witnessing the world containing every human idea and memory and accomplishment from the beginning of this species’ short blink of an existence disappear on a grain of sand within vast beaches on the shores of the universe, underlines just how petty and ignorant divisive attitudes are.

I’d like these kids and myself and people in general to look up at the sky without pretending the view we see is the correct perspective. This is what Kenya Feel the Love is really about. It’s time to leave behind the archaic sense of tribal superiority we hold on to and truly appreciate our humble place with one another on our planet, in our solar system, and beyond.

We went from geocentric to heliocentric. Maybe it’s time we went from human and self-centric to something a little less self-indulgent and a little more selfless. Maybe like truth-centric… Compassion-centric. Knowledge is the means by which we come to terms with how little we really know, while wisdom is applying the significance and preciousness of each human consciousness toward improving life as we know it. Let’s be that-centric.

Have a good day and don’t forget to look up every so often. And let’s each shine on. (“Like the moon and the stars and the sun.”)

DepartureFebruary 12, 2015
Take your protein pills and put your helmet on.